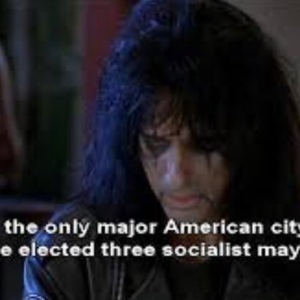 “‘Millioke,’ which is Algonquin for “The Good Land”

Panic Returns to the Cream City!

This weekend, the boys hit the Riverside Theatre in Milwaukee, Wisconsin for what will likely be another excellent run of three shows. The band has made the Riverside its exclusive Milwaukee home since 2006, but before that, they played all over “The United States of Milwaukee,” from Shank Hall and the Modjeska to the Eagles Ballroom and Summerfest. We get things started with the band’s first trip to the Cream City in 1992, follow it up with their first set at Summerfest in 1995, and close it out with the epic 1996 show from the Modjeska, and a damn fine Fall 1998 show from the Eagles Ballroom. In between the music, Jeff tries to remember his Milwaukee geography and recall some of his favorite haunts from when he worked in the city in 2012-13. His memory is not as sharp as it used to be though, so he probably made some mistakes. He also forgot to recommend his actual favorite places: Sobelman’s (burgers!), Soup Brothers (red pepper bisque with the sour cream rice ball!), Palomino (tator tots!), Three Brothers (spinach borek!), and Blackbird (beers, cocktails, and board games!). Or just find a fish fry with potato pancakes as a starch option and you can’t go wrong!

Tech Note: We had some serious connectivity issues, so we apologize if it doesn’t sound the best or if it sounds choppy. We also planned on doing a part two and we were gonna play some freaking George McConnell, but Jeff’s wife got sick and his baby is a tool sometimes (but is still sooooo cute), so recording has been difficult to do. We will honor good ole George soon, we promise!

Links below go to whole show streams from Relisten (just this one time, we promise!).