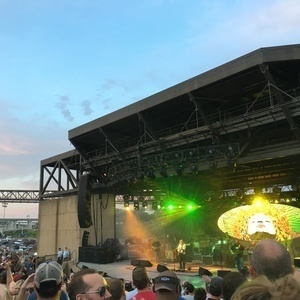 A Very Special Episode of The Bluest Tape

This week, we recap the weekend that was at Mud Island in Memphis, TN. Jeff and Harvey had both planned on attending the shows and giving you the hard-hitting, accurate analysis that you all have grown to love over the past year, but alas, it was not to be. Jeff, however, did go to the show on Friday night, and, SURPRISE, he LIKED it. That’s right, faithful listeners, Jeff actually LIKED the show. Hell, he’s not even gonna complain about ‘Steven’s Cat!’

It was a stellar weekend of performances and setlists - the band really is bringing it with this new concept of doing weekend runs and experiences as opposed to longer tours. We’ll dive deep into the whole scene at Friday’s show, including some pointed commentary on ‘lot shirts,’ talk about the Saturday show (check out the 2nd set and encore!), and leave you with a reminder that while Panic 3.0 is potentially growing on us, we are still - and will always be - Panic 1.0 partisans. When you listen to this “Diner” from 6/15/96, you’ll be reminded why, too. Enjoy everyone and be good to each other!