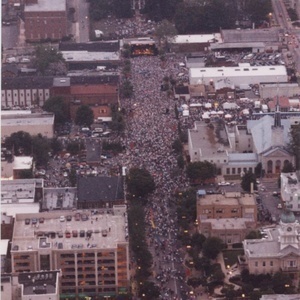 20 years ago, on April 18, 1998, Widespread Panic played a free record release release party to approximately 100,000 fans on the streets of their hometown Athens, Georgia. There were a lot of challenges to pulling something like this off, but with that band in that place at that time, it almost seemed meant to be. Coming off of a European tour which saw the band playing in some of the smallest venues they had played in a decade, they returned to their hometown and played to the largest crowd they had ever played to. And boy were they up to the task. A good chunk of the show was released on VHS, CD, and then finally DVD. This week, we play all of the tunes from this show that were not released officially. Included are three debuts: "All Time Low", "One Arm Steve", and "Christmas Katie" as well as some fantastic versions of Panic classics like "Diner" and the apt "Papa's Home".

We also were lucky enough to be joined by Gordon Lamb, Senior Writer and Columnist for Flagpole, and author of the new book, Widespread Panic in the Streets of Athens, Georgia. Gordon shed some light on the history of the Athens music scene, the political struggle of putting an event like this on, and of course the band itself.

Please go to your local bookseller and pick it up today. Or if you don't want to leave your house, pick it up at Indiebound.org

Link below go to whole show streams from Panicstream.